So if anyone's out there I've decided to show my face again, so to speak. It's been a long time since I was active, so sorry to everyone who wanted the hack.
Basically, I'm starting over. I've restarted the project from a fresh fire red ROM and I'm in the process of putting all the sprites in their respective places. Why start over? Well when I originally started this it wasn't meant to be a full hack. I hadn't planned on remapping, creating a story, or anything along those lines. The original purpose was to create a base for future digimon hacks, unfortunately my ambitions went rampant and I found myself overwhelmed.
Now I'm back to the basics, and as much as I would like to make a full fledged game, I refuse to do so until this project is complete. Last time around I was changing stats, movesets, evolutions, etc. but now I'm just inserting sprites. Charmander is replaced by Agumon, Bulbasuar by Palmon, and Squitle by Gabumon. I'm not even touching the multiple digivolutions for now. I'm putting in sprites where I think they'll coincide with their pokemon counterparts so that I don't have to worry about stats or movesets. That said, they'll only match up to a point and when I reach that point I'll start working on the nitty gritty.
But, yeah, I'm back and still working on this thing.

In a peaceful world where digimon are owned and raised as pets, a disturbance begins to shake the world. You, a teenager from Modem town, are sent on a mission along with your rival Matt to scout the nearest city for any information on this disturbance. Gennai, the town elder, sends you on this mission and allows you to choose your very own digimon for the dangerous journey.

You are also given a digivice, an artifact from the ancient times that once aided your ancestors. The digivice is old and incomplete, so it is your job to refill it with the data it has lost by capturing all the digimon in the world.

You find that strange things are occurring in your world: some digimon are turning evil, others are digivolving beyond normal levels. It was once rare for digimon to reach ultimate level, but now many have become Mega levelled.

You report to Gennai and he tells you of a legend from the ancient times, before the digital world and the real world were one. The dark forces that once fought to destroy the worlds will return, and only the descendants of the fabled digidestined would have the power to vanquish the revived dark masters.

You will quickly encounter an evil digimon named demidevimon. He despises all tamers and wants to rule over the digimon and humans, making slaves of both. Demidevimon will return again, then digivolve to Devimon. Once you beat Devimon he will return at a later point with a tamer. Although it appears he is obedient to the tamer, the opposite is the truth. Devimon has gained control of this tamer and is using him to capture digimon and twist them with his evil ways.

Along your journey you will find various ways to digivolve your digimon, including the long lost art of armor digivolution, and the rare DNA digivolution. Using such things may take your digimon down a longer and more powerful path than it would achieve naturally, thus is the power of the tamer.

There will be various items available for you to use in your quest. These items are called digicards, or just cards for short. One such card is a TC, or temporary card. It allows a digimon to learn a move. TCs are destroyed after a single use. Other cards exist that teach any number of digimon moves. These are called PCs or permanent cards. DMCs, or digi modify cards are cards that can be given to digimon in order to boost stats, heal status problems, or to obtain certain abilities. Some can be found on card trees, but these vanish after use. General cards are also a one time use, but are very common and cheap. General cards can be used for various things like restoring HP, MP, or boosting stats. Key Cards can be used for much more varied things, like opening doors or activating certain digivice functions such as finding tamers willing to battle, finding hidden items, or playing various melodies.

As the descendants of the ancient digidestined it is your duty to save the world, or take control of it. What destiny you choose and what digimon will get you there are all up to you.

Tai will be the protagonist male, Sora the female. Matt will be the rival. Gennai from season 1 will take place of Prof. Oak. They aren’t really going to be the kids from the first two seasons, but the descendants of those kids. Other characters will also appear as common trainers and gym leaders:

The starters will be of these three types, rather than the obvious and overused triangle of starters:

They will start as level 1 Digimon, a level which adds a large degree to the amounts of time needed for training at the beginning of the game, but which is necessary to allow the dynamic digivolution system I’m trying to create. 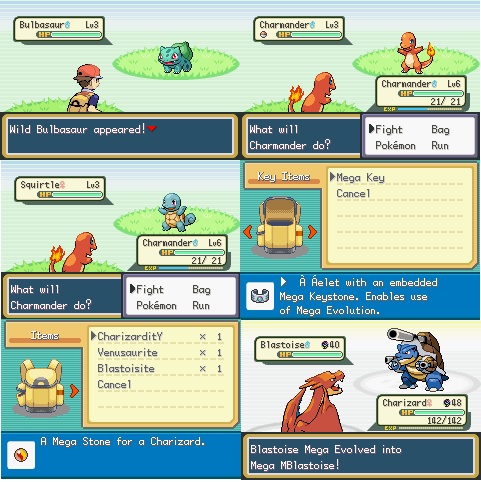 If you like this hack's features, you can view screenshots, videos, cheats, walkthrough of it and download below.

Thank you, friend. Please contact us if you need help.
Leave a comment if you love this hack!