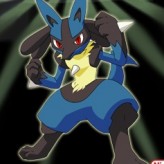 In the altered world where Team Go-Getters accidentally created lives a young girl who always dreamed tobe a Guardian Trainer after she heard all about it, even though she has no idea how to be come one, but still, she's determined to achieve her goal to be a Guardian Trainer. 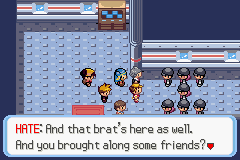 One day, she can no longer stay home, for she wants to achieve her goal, and so she went out to try and befriend a Pokemon so she can travel the region and learn about Guardian Trainers. Unfortunately, she was stopped by her childhood friend, Kevin, and when they decided to go back home, a shaman was running for her dear life. She was chased by two members of the Dark Organization, trying to steal her Pokemon.
Unsure of what to do, she asked both kids to choose one Pokemon from her and battle the grunts. Later, they successfully defeated the grunts, which then fled. To thank them, she gave them the Pokemon they used as a reward.
And now that she has a Pokemon with her side, she will finally be able to start her own journey to achieve her goal to be a Guardian Trainer, But the region's been chaotic since the rise of the Dark Organization. Trials await her in the future, and a strange dream's confusing her. Will she be able to achieve her goal, or will she drive her destiny into the wrong path of life?

PokeCommunity
Pokémon Ruby Destiny - Life of Guardians
destinedjagold
GBA
???
A young girl who just reached 10 was having a birthday party with four friends who likes POKéMON, just like her, but before they could even start, a mysterious aura came inside the room and made them faint.
Soon, the girl woke up in a forest which was unfamiliar. Then strange voices was heard. Curiosity and unfamiliarity, she took a look and to her surprise, a Chikorita and a Torchic came towards her, and talking. Asking how a Pikachu reached in the place, she exclaims that she's human, however, she later found out that she turned into a POKéMON; a Pikachu.
Having no place to go, she joined their rescue team called 'Team Go-Getters'. The purpose of a rescue team is to help other POKéMON who are in trouble, which requires exploring new places in the Hevah Region.
Later, during their mission in Garden Field, she found out that her friend, Rose, was chased by a group of POKéMON who tries to eliminate her. She also found out that Rose turned into an Eevee.
They later found a Dratini, which was also one of her friends; Steve, in Mt. Krystal, and Mark, the Taillow, in Ilex Forest after they escaped the hunters' aircraft. And soon, she found Jagold, the Sandslash, who helped them return the trust of the POKéMON in the square where their base stood. Now, all they need to do is to find a way to return to their world.
Soon, a shadow started to be a threat to the Hevah region, which has caused chaos and destruction in the region. And after they stopped the shadow, Giratina, in Mt. Iniquity, peace, once again, reign over the region.
However, during this peace was the shadow's perfect opportunity to recover. However, Giratina, to truly cause ultimate chaos, needs a host with a strong mental and physical ability to be able to walk on the surface, which then chose Jagold, the Sandslash, who visited the ruined place of the battle.
Jagold had a battle with the shadow, and won, however, the shadow took over his shadow, causing him to unable to give the final strike, and the shadow overwhelmed him.
The news reached Team Go-Getters through Breatherna in Oceania Isle, which is where Jagold is, inside the Tower of Fate, in Oceania Isle. The Tower of Fate is also the place where they can return to their world. That was Giratina's plan, to destroy the tower.
Soon, they found a Dark Pikachu who knows them better than themselves. Torchic and Chikorita were confused. The Dark Pikachu told them that he sealed their memories to save them from Tyranitar's wrath.
The tower was full of mazes and puzzles, but they successfully went through it and met Jagold, and asked them to eliminate him, but she refused, which then the shadow took all of them in Jagold's mind, which was already overwhelmed by darkness.
After they defeated the threat, Giratina, who controls him, Jagold was free.
Soon, they reached the gate where they can finally return, but a POKéMON who guards the gate blocks them. It was Chaomega, who told them that Jagold was meant to die, but since he didn't, they created another future, different from the future which was meant to be.
One world with two futures would cause destructive results, and to heal it, Jagold must die, and Chaomega battles and wins with moves unfamiliar to them. Chaomega landed in front of Jagold, preparing the final beam, but she stood between them, asking to stop. This made Chaomega disregard it's attack and sets them free. Chaomega quickly sends them back to their own world, leaving Chikorita and Torchic behind with a broken heart.
After they left the gate, Chaomega went to Breatherna who was feeling ill. Chaomega tells her that he didn't told anything about what would happen to Team Go-Getters, that now they entered the future, another one's taking place. Breatherna was feeling ill because she can't handle two realities, and soon, Chaomega witnessed her torn apart into two.
Chikorita and Torchic tried to move on with the Dark Pikachu to be a rescue team.
Download:
Coments are closed
8 Ball Pool Hack Tools Free DownloadHack Tool Download Ios